I’m sure you’ve heard of them, but if not, ad blockers are little pieces of software that prevent ads from displaying on websites as you browse the internet. The software does this by serving as an interstitial between your browser and the internet. Ad blockers check everything that comes from the web to see if it is an advertisement or tracking cookie, and if it is, it doesn’t allow it to make it to your computer. It’s like a firewall against advertisers. Ad blockers have been increasing in popularity over the last couple of years, which is causing concern for websites that rely upon ad revenue to stay afloat. In 2015, the Wall Street Journal reported that they expected ad blockers to cost the online advertising industry over $22 billion, and they expect that number to grow to over $35 billion by 2020 (they are a paywall site so I won’t link to them).

In 2016, HubSpot conducted a survey of ad blocking software users to find out why they use the software. They found that 51% of people said it is because they want control of their internet experience, and 64% of people said they use it because ads are intrusive and annoying. The internet marketing standard for display ads has historically been to make ads as flashy, intrusive and distracting as possible in order to direct the user away from the content they’re reading in order to see the ad. That message has backfired on advertisers. 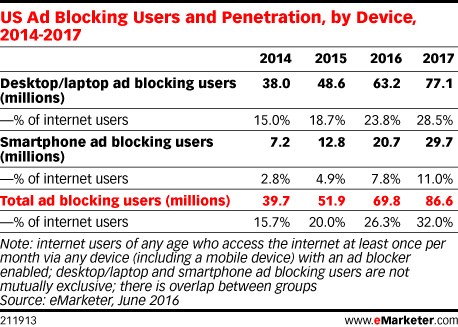 Websites are having a very difficult time figuring out what to do to regain lost revenue. Ad revenue is the only source of income for a lot of websites. Some sites have started blocking users who use ad blocking software. That’s a bold statement. If you refuse to see their horribly-annoying ads and have your computer filled with tracking cookies, you’re not welcome on their site. That is a very self-important philosophy, and won’t get you very far on the web. The internet is awash with other websites that will deliver the same information without requiring a user to disable their ad blocking software and allow the crap through. Forcing a user (who already doesn’t trust you because they have the software in the first place) to disable their ad blocker is only going to drive users away from your site.

I use ad blocking software. I’m an internet marketer and I don’t want to be bothered. I dislike ads so much that I block it on our office network on the firewall, and we use browser-based blockers to catch whatever leaks through the firewall (we use incognito to check out clients’ ads).

This whole post started because I needed to check the value of a car in order to write an effective ad on Craigslist. I zipped over to a source I’ve trusted for many years; Kelley Blue Book. I was surprised when they promptly informed me that I was not welcome on their site because I use ad blocking software. Their message said that if I wanted to view their content I needed to disable my ad blocker and they did it with a condescending “Thanks for supporting Kelley Blue Book.” I hate it when people thank me in advance for doing what they want me to do. Not a chance. They immediately lost my trust. I was a faithful user for so many years. Not anymore. I immediately went to a different site. Edmunds.com is currently not blocking users with ad blockers, gives great information and accurate pricing information on cars. Go use their site if you need vehicle pricing data. I’ll be using them from now on, or at least until they start blocking me. Then I’ll just price everything at 10 bazillion dollars and accept reasonable offers.

This message made me think that KBB’s ad revenue must really be down. They’re looking pretty desperate for ad dollars. This desperate plea for me to disable my ad blocking software made me curious, so I looked into it a little. Alexa — not the Amazon speaker on your counter — reports a large drop in traffic since last July. I’m not sure when they implemented their ad blocker message, but it certainly isn’t helping things. 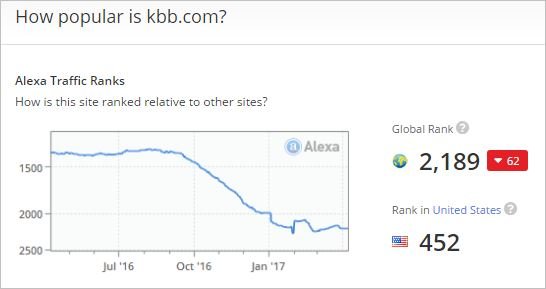 I thought maybe it was just that time of year and traffic was down in that industry as a part of a seasonal swing. I went to Google Trends to see historical search volume for phrases that KBB ranks well for to see if interest is down in general. I was a bit surprised to see that interest is not down. The huge drop in traffic reported in Alexa is not due to a reduced interest in the subject. The red box in the graphic below covers the same period in the Alexa report above. 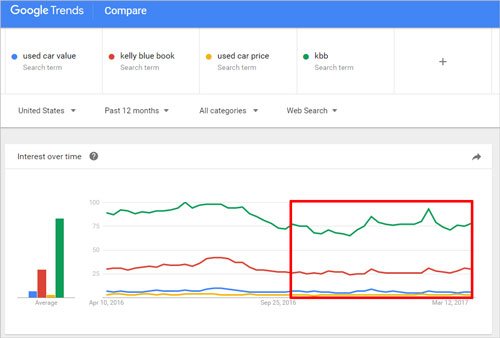 If interest isn’t down but traffic is, what could be the problem? Could it be that their ad blocking message has really hit their site hard? I investigated ad blocking software adoption and found great stats from Pagefair. The red box in the image below highlights the same period covered in the Alexa report on KBB. Could their precipitous drop in traffic be linked to a significant increase in ad blocking software and the fact that they tell ad block users to go away? I’d say it’s a real possibility. 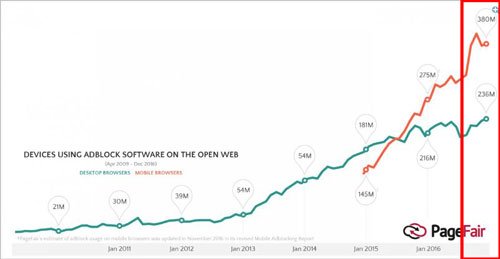 Other big content websites have tried blocking users who have ad blockers. It didn’t go well for them and they’ve since reversed their decisions. Forbes tried it in 2015, and GQ magazine tried it in early 2016. Here’s the message Forbes tried for a while: 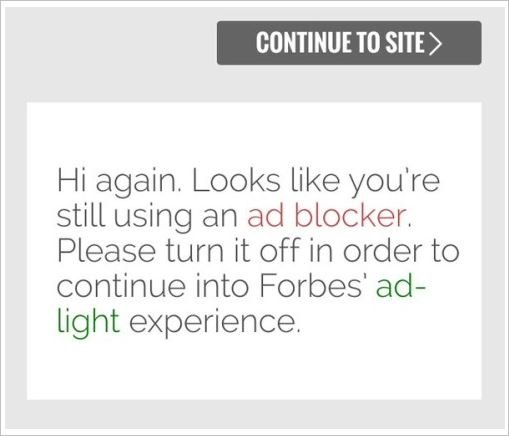 TechDirt reports that a security researcher visited Forbes while they were blocking ad blockers. The researcher went ahead and disabled their ad blocking software to view the supposedly “ad-light” website and here’s what happened:

On arrival, like a growing number of websites, Forbes asked readers to turn off ad blockers in order to view the article. After doing so, visitors were immediately served with pop-under malware, primed to infect their computers, and likely silently steal passwords, personal data and banking information. Or, as is popular worldwide with these malware “exploit kits,” lock up their hard drives in exchange for Bitcoin ransom.

I had Forbes open today checking out an article to see if they still block users with ad blocking software. They didn’t stop me from using their site, but they made sure I won’t be back with a loud auto-play video advertising an article about organic tampons. I don’t like Forbes much anyway because of their left-leaning traditional media stance, and their auto-play video made sure I won’t be back. 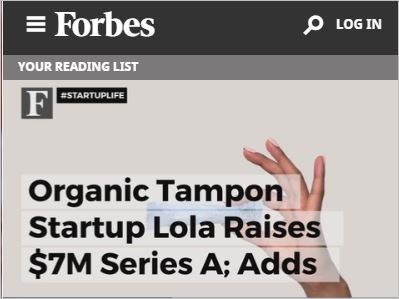 According to another article I found, GQ tried blocking advertisers for a while as well. At least GQ was creative, as they offered users an option: disable their ad blocker OR pay them fifty cents per article the user wanted to read. I don’t think that went over very well either because I accessed the site today and did not receive a message asking me to disable my ad blocker.

One important note about ad blocking software is to beware of the software you use. Several popular programs sell your internet usage history and some even allow advertisers to buy their way through by paying to whitelist their ads. AdBlock Plus is popular, but allows advertisers to pay for whitelisting. In my opinion that wipes out all credibility AdBlock Plus had. I recommend using uBlock Origin. It is very effective and doesn’t allow advertisers to buy their way through the filter. Oh, and for used car values, go use Edmunds.com. They still want you, even if you block ads.